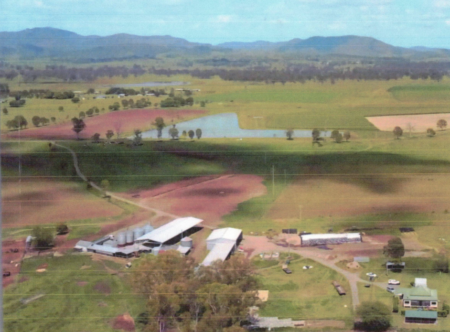 James Darren Jnr.  born in the Province of Leister, Eire, 1849, and was part of the vast migration out of Ireland post the Great Famine. Escaping hunger and dire poverty, 1.5 million Irish citizens sailed to other lands hoping for a better future.

In 1871 James took up a lease of what had been Bromelton Station when it was opened up to settlers. In 1859 Queensland began breaking up vast tracts of land “squatted” by English and Scottish pastoralists..

As part of the provision of his lease, the heavily timbered land had to be cleared, fenced, and a homestead built and occupied for at least three years of the first 10.

Eventually, the land became his, despite backbreaking labour as a single man with only hand tools. However, the fertile alluvial soil yielded bumper crops of corn and potatoes and around the time of his marriage to Margaret Mary Hoare, dairy cows, plus a sideline of pigs, were also added. Woodlawn supplied the local butter factory.

Sadly due to increased costs and diminishing returns dairy farming, has ceased.

Displaying the resilience of so many century and sesquicentennial farmers It has been successfully replaced by the production of broiler chickens, for a national company, beef /dairy cattle and the sale of hay and other livestock feeds.

Woodlawn is now home to 4th generation Tim and Janet Deeran and family.